If fire breaks out, the construction elements must fulfil their function despite the effects of the fire. The stability of the structural elements must be ensured throughout the period of time needed to evacuate the building. The walls and doors that separate the various compartments of the structure must limit the spread of the fire. Heinen can confine fire for up to 180 minutes. In fire-resistant compartmentalisation, but the weak points are the building openings.

The evacuation of people and deployment of the emergency services will be more efficient if the atmosphere is clear and breathable. Thanks to intumescent seals (which swell upon contact with heat), developed by Heinen, and certified smoke tightness, Heinen doors prevent the spread of fire and often fatal smoke.

Heinen fire-resistant doors have been designed to meet your needs in exceptional dimensions, while still meeting the requirements in terms of intensive use and mechanical resistance. For example, a Heinen double door, EI1-60, can easily compartmentalise an opening of 4.40 x 4.40 m!

Heinen has always been a pioneer in fire-resistant compartmentalisation.

As early as 1973, the brand attracted attention by perfecting the world’s first metal fire-resistant door! Since 2010, Heinen doors have been validated according to European standards by no fewer than 30 official fire tests. The pace of developments and the intensive activity in the R&D department even prompted the company to purchase its own furnace that meets European standards in order to carry out pre-tests.

European fire standards have gradually taken over from national standards and are now the reference for fire testing and classification.

The reference for fire resistance testing of doors, closures and windows is the European standard EN 1634-1.

The resistance class is expressed in minutes, which corresponds to the duration of the fire tests (from 15 to 240 minutes).

The success of fire tests is subject to different categories of criteria, depending on the country: 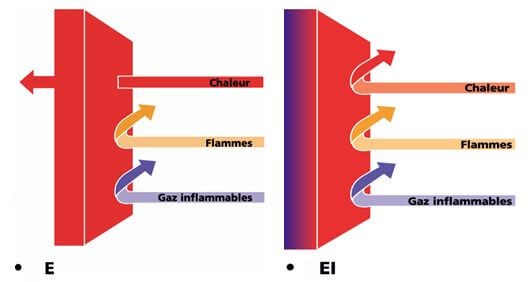 Thermal insulation I1 & I2

Insulation is subdivided into two categories that are applicable in different countries: I1 and I2. The I1 fire tests are more severe than the I2 tests (see more information to download below).

EI2 is applied in most EU countries such as France, Germany, Italy, Spain, … example: EI2-180

EW is imposed in the Netherlands. example: EW90

To find out about the differences in testing and values between EI1 and EI2, download our documentation on fire protection standards!

DOHE 008 – Details on thermal insulation I1 and I2