For fire resistance (1634-1), there is a variant on the ISO 834 standard curve. It is the HCM (modified hydrocarbon) curve, mainly used in France since the Mont Blanc tunnel tragedy in 1999 in which 39 people lost their lives. This curve was designed to show the very rapid rise in temperatures that occur when fires break out in confined spaces like tunnels. It is now used to certify the fire resistance for doors that will be used in tunnels.

Just a few minutes after the fire breaks out, the temperature reaches the threshold of 1300 °C which remains constant through the remainder of the fire tests.

Another curve follows very much the same trajectory. It was designed in the Netherlands and is generally known as the RWS curve (named after the “Rijkswaterstaat”, the ministry of public works, which is responsible for the management of motorways and thus the country’s many tunnels). 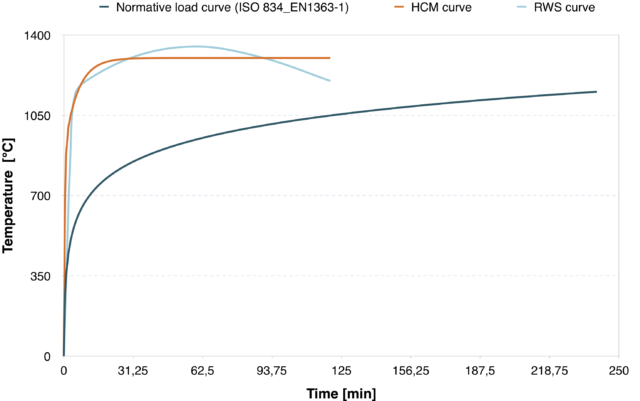 Three levels of resistance have been defined for tunnel doors:

These are available to measure, in single and double versions, and can add other performance characteristics (acoustic, burglary resistance, etc.) to suit the range of situations present in tunnels. If necessary, they are also fitted with evacuation mechanisms (anti-panic bars or handles) to meet European standards EN 1125 and EN 179.